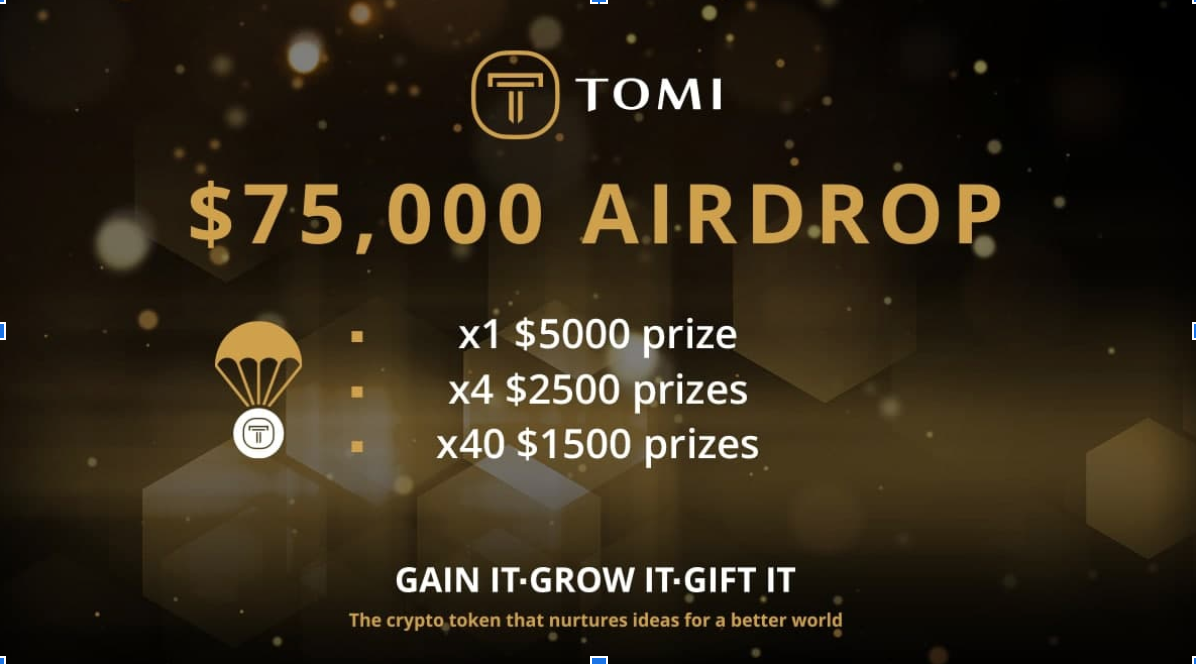 Get ready for the financial opportunity of a lifetime – Because TOMI is introducing an airdrop worth a staggering $75,000.

After its successful NFT sale and IDO, the team wants to broaden access to its ecosystem and incentivize future participation – Claiming the airdrop is very easy, and more than 45 people will win a fantastic opportunity to get involved early in the TOMI ecosystem for free.

The launch of Tomi’s ecosystem and the TOMI token has been widely anticipated. Interested parties first had to acquire a Tomi Heroes NFT through openSea to earn eligibility for the TOMI sale rounds. Those NFTs brought in 459 Etheruem, which the Tomi team used to buy back TOMI from the market and burn it forever.

Effectively reducing its total supply by over 12,386,000 tokens. That approach set the tone for a bullish wave of sentiment that is still present today.

Through several 30-minute rounds, investors were able to buy TOMI tokens during a brief IDO window. A total of 485 token holders emerged initially, and TOMI noted an ROI of over 54,600, which is astronomical in the cryptocurrency industry.

Since then, TOMI has held its price very stable, and the overall trading volume holds up well. Thus, there is still substantial buy support for this token, which now counts 1,239 holders. Moreover, there are over 6 million pooled TOMI on Sushiswap, and the asset notes just under 19,400 transactions.

Following the successful NFT sale and IDO, Tomi’s team now takes the next step. An airdrop will be organized to distribute $75,000 in TOMI tokens. The main objective of this airdrop is to drive community growth and expand the current user base. Users can access this airdrop, which started on October 18, 2021, and runs until October 31, 2021.

To participate, you must follow these quick and easy steps:

Like and follow Tomi on Twitter and retweet this tweet + tag three friends in the comments below using the $TomoAirdrop hashtagJoin the Tomi Telegram groupFill in the form to confirm you completed all steps and add your Ethereum address.

All winners will be announced throughout the airdrop to keep building excitement. Tomi will announce up to 8 winners every two days, with the final five winners being unveiled right at the end of the airdrop timeline. Participants can re-enter the competition if they tag three different people on social media.

At its core, Tomi has always stood out as a cryptocurrency and blockchain project. Instead of consolidating power among early investors, developers, or other backers, Tomi has been built to give back to the community.

That became even more apparent when the team put the community in charge of all TOMI liquidity, even though it wasn’t their first confirmation of this broader transparency and community-oriented control.

The transparency roadmap for Tomi confirms the steps taken so far:

NFT funds were used to purchase TOMI and increase its valueThe team burned the purchased TOMI assets permanently.Community gains control over Tomi’s liquidity pools. The team pulled 600 WETH to purchase more TOMI, burn it, and increase value for users.Founders and developers hold no TOMI tokens, nor did they keep a share of over $3.3 million in WETH after the token launched.

That level of commitment is one of the main reasons TOMI is set to explode over the coming months. No other developer team has been this committed to putting the community in control and empowering every TOMI holder. They could have taken millions of dollars, yet no founder or developer even entertained the thought.

Instead, Tomi is designed to impact people’s lives for the better. As a result, the future price potential for the TOMI token is off the charts and there are still more developments coming!

What Comes Next For Tomi?

Fueling the hype and momentum surrounding the TOMI token are upcoming ecosystem developments. Both TOMISwap and TOMIFundMe are crucial pillars of the Tomi vision, and both will continually bring value to the TOMI token.

More importantly, these two pillars strengthen the community-oriented focus of the team and will pave the way for the broader adoption of this project.

TOMISwap shows all other decentralized trading and swapping platforms how to tackle the “Ethereum fee problem’. Instead of relying on the Ethereum network’s gas calculation, TOMISwap charges a flat 0.3% of the transaction amount for all trades and swaps.

It is an elegant, simple, and transparent solution that avoids slippage, higher fees, unsatisfying orders, etc. Moreover, a large portion of these trading fees is put back into the ecosystem by funding TOMIFundMe, another solution that can change many lives.

If you are not excited about TOMIFundMe, I don’t know what’s wrong with you. The solution lets anyone create a business idea and business plan and submit it for Tomi community review.

Approved projects will receive a grant, paid for by the fee share collected from TOMISwap. TOMI holders have the chance to make a meaningful global impact and foster the next generation of blockchain development. The value that brings to the token is priceless.

Everything that goes on in this ecosystem is to empower the user rather than the creator. As a first community event, giving away $75,000 sends a strong and clear message to all onlookers.

Conducting an airdrop after checking off the transparency milestones and ahead of launching TOMISwap and TOMIFundMe is of tremendous significance and will push up the TOMI value astronomically.

There is still time to participate in the $75,000 TOMI airdrop. Make sure to complete the following steps:

Like and follow Tomi on Twitter and retweet this tweet + tag three friends in the comments below using the $TomoAirdrop hashtagJoin the Tomi Telegram groupFill in the form to confirm you completed all steps and add your Ethereum address.

Do not want to miss out on this opportunity?

For more information on how TOMI is changing the world of DeFi forever, visit the website.